Thieves are allegedly using a “mystery device” called a relay attack unit to unlock and drive off in cars and trucks with keyless-entry fobs and push-button starters, the National Insurance Crime Bureau (NICB) once again warned this week.

On the heels of prior warnings and studies conducted on similar theft methods, NICB spokesman Roger Morris said the agency got its hands on one of the devices and tested it on 35 different vehicles. The testers were able to open 19 of the vehicles and could start and drive away in 18 of them. The contraption used by the NICB consisted of two modules, one the size of a tablet and the other roughly the size of a garage-door opener, but the agency wouldn’t elaborate on its exact construction. 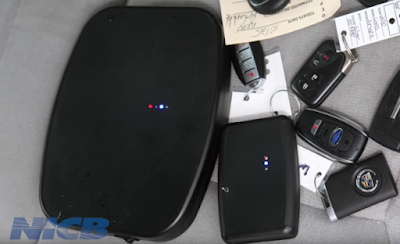 Morris said the NICB first started seeing such mystery devices surface about two years ago but has yet to be able to quantify how often the devices have been used in vehicle thefts. Feedback from some of its member insurance companies suggests that for some stolen vehicles, “these are the only explanation,” Morris said. The NICB bought their test device through a third party, which Morris said he couldn’t name. We’ve begun looking for such devices ourselves, with designs on performing our own tests; we’ll let you know if we’re able to secure any devices and how well they work—or don’t.

For police in Modesto, California, a city that the NICB cites as having the highest rate of car theft last year, such devices indeed remain a mystery. “I can tell you that we haven’t seen it first hand,” said Sgt. Tony Dominguez, of the Stanislaus County Auto Theft Task Force, which oversees Modesto. Dominguez did not rule out the existence of such devices in the county and added that sometimes with newer and higher-end vehicles, the thieves are difficult to locate.

The alleged rise of the mystery devices comes as hardware is increasingly replaced by software in cars and trucks, making the vehicles both more secure against traditional, slim-jim-carrying crooks but possibly more susceptible to sophisticated hackers. It has created a cat-and-mouse game between OEMs—who are trying to ensure vehicles are secure even as they become more computerized, sharing findings and research via alliances—and increasingly savvy car thieves.

Auto thefts dropped dramatically from a peak of about 1.6 million in 1991 to about 700,000 in 2013 but have been back on the rise recently, according to the NICB. Regardless of whether or not these devices pose an actual widespread threat, for owners of cars and trucks with keyless entry, Morris said one obvious way to prevent such a theft is to be alert. “If you see someone suspicious standing around, take a second look, don’t confront anybody, and report it to the police,” he said.

Morris also advised against leaving important papers in the glovebox that show your home address, as well as keys to your home. In lieu of having a physical vehicle registration in your car, keep a picture of it on your cellphone, he said. To this, we’ll add: Try to park inside (including parking garages) if at all possible, and don’t leave valuables in plain sight.

Sgt. Dominguez agreed with these prevention measures. For the ultra-worried, he also suggested a tried-and-true, old-school theft deterrent: the Club. “If you still have that type of mechanism, you still have one extra step on keeping it from getting stolen,” he said, adding that his task force gives them out for free to owners of the county’s top 10 stolen nameplates. “[The Club] is not 100 percent effective, but it definitely creates a deterrent.”