Home/ car/And the Winners Are: 2017 10Best Trucks and SUVs in Pictures

And the Winners Are: 2017 10Best Trucks and SUVs in Pictures


Since 2009, sales of “trucks”—an increasingly diverse group consisting of SUVs/crossovers, pickups, and vans—have fully doubled. This rapid growth means they now make up a massive chunk of U.S. new-vehicle sales, 57 percent in 2015 and 60 percent through November 2016. In other words, it’s time we expand our 10Best franchise to recognize excellence in the majority of the marketplace. 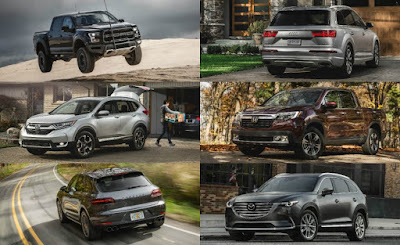 We’ve been down this road before, with the 5Best Trucks awards we handed out from 2001 to 2008. As we did then, and unlike 10Best Cars, we’ve organized our new truck and SUV awards around segments, with one vehicle from each subset taking home the prize. The incredible model proliferation also sees us expand to 10 categories: full-size pickup, mid-size pickup, van, and seven SUV categories broken down by size and separated into luxury and nonluxury branches. The one exception is large SUVs and large luxury SUVs—nonluxury and luxury models compete for the same award because, once you’re shopping for a Chevrolet Suburban, Ford Expedition, and the like, they all wear luxury price tags. Explicitly proving our point, the GMC Yukon XL that was sent for our competition had a sticker price higher than that of the Mercedes-Benz GLS450.

The rules are simple. Every new or significantly updated vehicle with a base price less than $80,000 gets invited for a week of evaluation against past winners, after which every editor votes based on three tenets: value, the level of engagement from behind the wheel, and fulfillment of mission. (That last one necessitated a lot of clambering in and out of second and third rows, folding down seats to inspect cargo holds, and evaluating connectivity and convenience features.) Of course, we had no past winners for this inaugural year, so every nameplate—more than 140!—technically was eligible. For logistical purposes, we narrowed the fields to the new and updated 2017 models plus the top current models in each segment based on previous experience, comparison-test results, and, in some cases, the vociferousness and validity of the argument put forth by a championing staffer.

The results are in, and we’re pleased to introduce the 2017 10Best Trucks and SUVs.