What do a Vauxhall Adam and a Ferrari Enzo have in common? Unfortunately, the answer isn’t a 6.0-litre V12. It’s that both cars are named after their founders, sort of. Naturally, Vauxhall’s entry into the style-led supermini class is sold in mainland Europe as an Opel, a company founded by a chap called Adam. 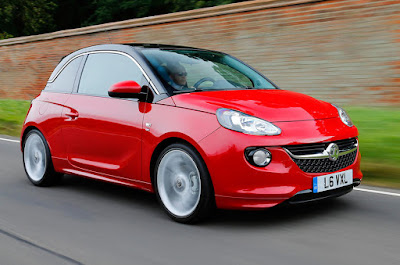 To draw in the kind of fashionistas that like to see their new car as a blank canvas, Unlimited trim allows you to pick from any of the dizzying array of personalisation options on offer, avoiding the limitations that other variants have. That means you can pick your body, roof, mirror cap and grille bar colour; choose the wheel size and design; add external decals; and pick seat fabric and dashboard inserts. You still have to pay extra for most of that, though.

Mechanically, it’s exactly as before. In the case of our test car, there’s a 1.0-litre turbocharged three-cylinder petrol engine bolted to a six-speed manual gearbox. Cheaper, naturally aspirated 1.4s and 1.2s are also on offer, should you not require all 113bhp of three-pot fury.

Vauxhall’s turbo triple feels like a perfect match for the Adam. Although it can feel a little flat if you put your foot down when there's less than 2000rpm on the rev counter, it soon picks up and has no trouble getting up to 70mph. It has a muted but appealing thrum if you work it hard yet remains smooth and refined at lower revs.

Impressively, there’s virtually none of the steering wheel tremors that some rivals suffer from when the start/stop system is activated. Given the low tax costs and fuel consumption that the official figures suggest, it’s definitely the pick of the range.

Even on the 16in wheels of our test car, the ride can become choppy over rough stretches of road. That’s partly down to fairly firm springs, but also the Adam’s truncated wheelbase. The front wheels are often still dealing with the after-effects of a bump just as the rear wheels hit it.

This firmness never translates into the kind of sporty handling that wins the Mini so many fans. The steering is too light and fails to inform you fully about the movements of the front wheels.

As you’d expect from a car based on a cut-down Corsa platform, this isn’t a particularly roomy car. Front space shouldn’t cause an issue for even the tallest of drivers, thanks to a high roofline, upright seating position and a reasonable amount of cabin width. It also feels much plusher than the Fiat 500 if not quite as good as the Mini.

Things get progressively worse the further back you go. Rear leg room is limited so only kids and particularly small adults will be happy for longer journeys back there. With only 170 litres of capacity, the boot is small and it also has a particularly high loading lip. All said, though, the Mini and Fiat 500 are similarly titchy inside.

Should I buy one?

If you’ve fallen in love with the looks of the Adam, then the Unlimited does make the most sense. It’s the cheapest trim available with the 1.0-litre engine and it has all the equipment you really need, if not necessarily want.

Even so, we would still suggest that the Mini One is - to these eyes - just as funky to look at, has an even better interior and is a far better steer. It may be more expensive to buy when similarly equipped, but we’d say it’s worth the extra.