The Edge was one of the most expected cars from Ford for more than a few years and their latest model, the 2016 Ford Edge just surfaced a few months back as a tough looking crossover ready to take on any roads the country has to offer it. However, things are as simple as they usually look.

The Edge will have Ford’s new adaptive steering system, which alters the ratio of the steering for more confident steering with less effort at low speeds, as well as Active Noise Isolation, to cancel out unwanted noises. 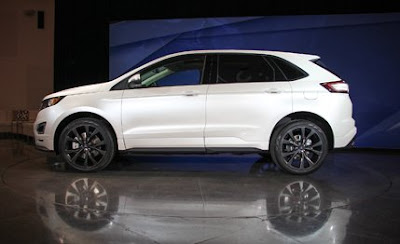 All models feature Intelligent All-Wheel Drive too, as well as torque-vectoring and Curve-Control systems that adjust the engine and the braking to help prevent loss of control in fast bends.

There’s a front, split-view camera to aid parking manoeuvres, and a rear camera system that works, with a Blind Spot Information System, to show the driver cars approaching from either side when reversing out of a tight space. Expect Active Park Assist to aid parking, too.

Depending on the trim selected, look for the entire 2016 Edge stable to sport 18-, 19-, or 20-inch alloy wheels and a rear spoiler on the outside, with cloth or leather upholstery, power-adjustable driver’s seats, full power accessories, cruise control, and telescoping tilt-wheel steering all returning on the inside. 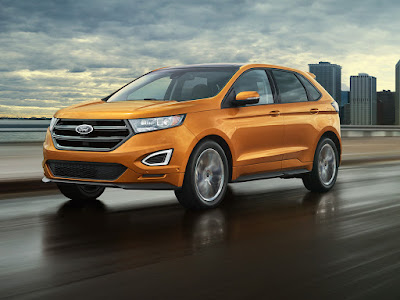 The Edge will slot in as the third SUV in Ford’s showroom line-up above the Kuga and the recently launched EcoSport. Ford says the utility segment of the European new car market grew from 10% in 2008 to 21% in 2013, with sales of the Kuga said to be up 38 per cent year on year for the first five months of 2014. The first generation of the Edge was a US-market-only car but was a significant success for the brand.

Ford says the Edge has been designed “from the ground up to be visually athletic and to meet high expectations for quality in Europe”. It describes the car as “upscale, refined, technologically advanced and spacious”.